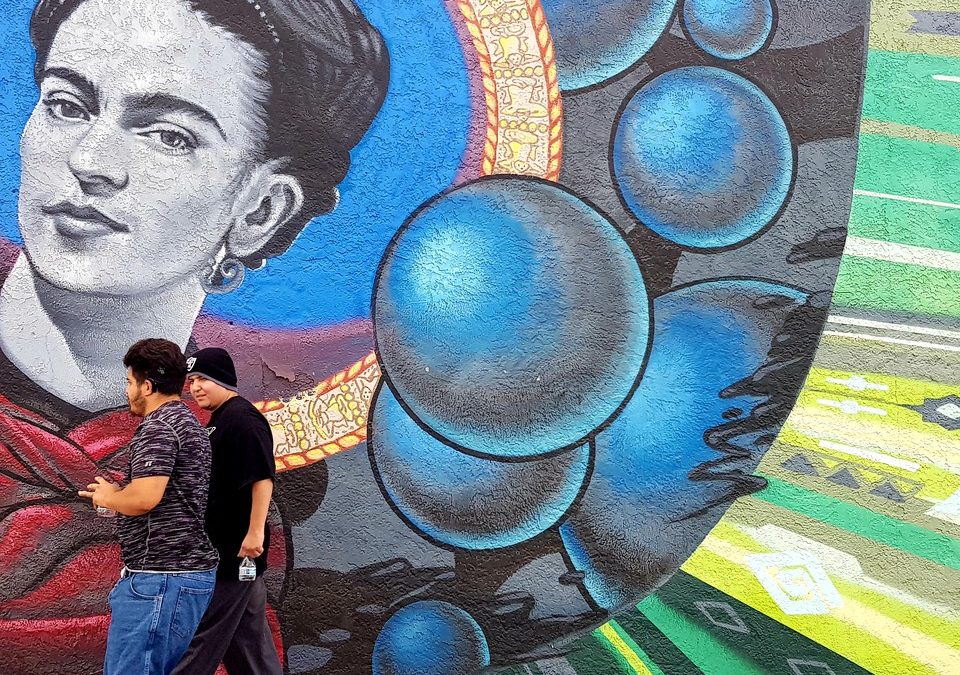 Today involved a field trip to a place called Pacoima to experience the Van Nuys Boulevard and the impact environment justice group, Pacoima Beautiful is having on street design.

Pacoima has a strong cultural identity expressed through the tradition of mural art. The residents are mostly of Mexican descent and from a low socio-economic background. The community had suffered from years of disinvestment leaving its people mobility poor and lacking opportunities for play and recreation.

Prior to the project, Van Nuys Boulevard was a six lane corridor with limited pedestrian crossing facilities. Traffic speeds and volumes were high and there were countless pedestrian and cyclist collisions and fatalities.

To tackle the challenge, Los Angelas Department of Transport (LADOT) adopted a community based approach. This involved partnering with Pacoima Beautiful to create a local safety scheme which respected cultural tradition and responded to the needs of the community.

The chosen scheme involved paint, signs and bollards to quickly and cheaply install bicycle facilities. The idea behind the bicycle lanes is to use them as a traffic calming measure whilst adding mobility options for the community. This was supported with additional crossing facilities at intersections.

The lack of concrete used in the design meant the community could get a ‘feel’ for the scheme enabling LADOT to make required adjustments. The approach also meant residents could reap the benefits sooner with opportunity to build on the scheme at a later date.

The scheme also involved gifting the community an area of open space. This was delivered at the northernmost end of Van Nuys Boulevard at the cul-de-sac of Bradley Avenue. This street has been transformed from a car park into a pocket pack to offer the residents an area for recreation, play and social gatherings.

Seeing people of all ages cycling and bike-bussing is evidence that the scheme is working for the people of Pacoima!

Photograph: Bikes of all sizes showing the levels of participation across age-groups